A photography release form is a permission contract between the photographer and the model or subject, allowing the photographer to take pictures of the subject. The subject can be a model, person, or property. In this template, we include permission to use a person’s likeness, the most common type of form.

In the United States, it’s illegal to commercially sell the image, called the “likeness,” of a person without obtaining their written permission. If you don’t obtain permission, the person can later sue and obtain damages or royalties on the commercial use of the image, which can amount to large sums of money.

You’ll need to do all of the proper research and homework first, but this template will give you a head-start and a good framework. You should always consult a lawyer though before finalizing any contracts. 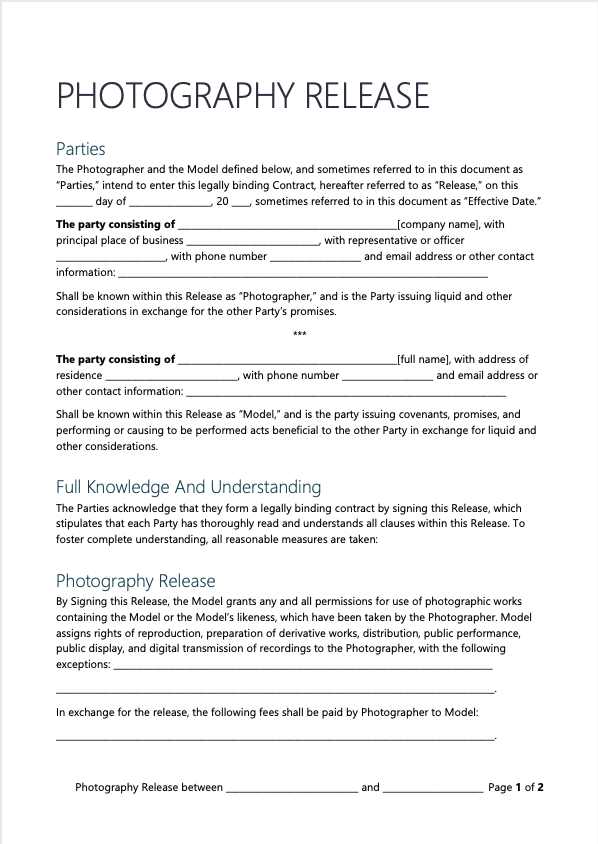 Download the template today and edit it using any version of our PDF Reader apps.

Obtaining a photography release form, also called a Model Release, is vital for professional photographers. Model releases are generally not given for free, because the model should be paid for the usage of their likeness. The Model release form, however, does not usually include the payment or consideration clauses of a contract.

There are three legal protections that the model release form is mostly used for. (1) The invasion of privacy, (2) defamation of character, and (3) right to royalties. Royalties might be negotiated in advance, and a release form should be signed. In the case where a release form isn’t signed, the legal resolution can be to sign and pay owed royalties.

But in the case of the first or second protections, much more serious lawsuits may be involved. If you’re a photographer, and you use the face or “likeness” of someone without their written permission, they have a right to get compensation for invasion of privacy or defamation of character.

Especially if you use the images or video for commercial purposes, and you get paid, the model has the right to obtain some of the payment. Even buildings and property can be covered under a release. If you don’t obtain permission to take pictures of certain buildings, you can be liable to pay a penalty, under one of these protections.

Creating a model release form is a straightforward process. You just need to collect the details of the person signing the release form and ensure that they’re over the age of 18 years and can legally sign a contract. A photography release must have a signature of the person or person’s legal guardian which waives their right to sue for the protections listed above.

In this photography release form, we’ve separated the different protections so that they can be optionally included. It allows photographers to make the photography release a little more attractive to their subjects or clients. By releasing invasion of privacy and defamation of character, but not royalties, models might have the potential to make money if the images taken of them become popular.

Model releases are legal contracts, so they must include the sections required for a contract to be enforceable in court. They need to include the “Parties,” “Acts,” “Consideration,” and “Execution.” In the parties clause, the full name and at least one form of contact information should be filled for the photography model (Client) and Photographer (Contractor). The photographer can use the company name here, and the rights will be released to the company, not the individual photographer.

In the Acts clauses, there should be a listing of items that the model gives to the photographer. This listing includes each legal protection or right that the model “releases.” Another word for these types of clauses is “Waiver.” When a “Waiver” is made, the model is waiving their right to sue.

If the model sues the photographer at a later time, the lawsuit will potentially be dismissed on any grounds that have been waived previously. It’s still possible for the model to file and argue a lawsuit with the photographer, but the likelihood of success by the model is much less likely.

Photography releases need to contain a section on consideration, and can simply state that the releases are made without consideration.

Depending on the location, the execution clause should include governing law stipulations that are specific to the geographic location where the photography takes place. Because the local, state and federal laws often are what grants the rights of photography’s likeness to the models- such laws can differ widely based on location. You should always consult a lawyer for this section, and add additional clauses as-needed to meet local laws, regulations, guidelines, and ordinances.

Additional sections may be added to the contract to account for potential situations that may arise. For example, arbitration and dispute resolution clauses can ensure that lawsuits are started in a cost-efficient and time-efficient manner, without perhaps involving lawyers right from the start. By being specific, and including as many potential situations as possible, these photography releases do their best to limit liability and risk for both parties in a fair way.

Photographers benefit from being as specific as possible when describing the photographs in question that are covered by the photography release. It can be helpful to include a clause that describes the venue, including the address and time of photos taken. Photos contain identifying data that comes directly from the camera, called EXIF, or “Exchangeable Image File Format.”

By listing EXIF attributes on the photography release form, such as the camera make, model serial number, and image shutter codes, photographers can reduce the risk of later disputes. Although EXIF data isn’t legally binding, since it’s not proof of non-alteration, it can still help create reasonable confidence that certain photos are covered by the agreement.

If you have received or desire to issue any legal document, you must consult a lawyer. Kdan Mobile provides this template for educational purposes only, and you are always responsible for the creation of any legal agreements you sign. By clicking "download," you agree to indemnify and hold harmless and inure Kdan Mobile for any damages incurred due to the use of the said template for commercial purposes.